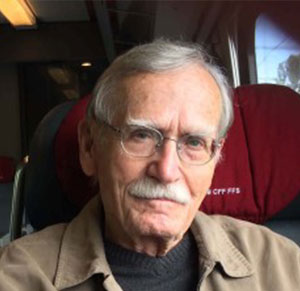 Peter Meinke has been both Poet Laureate of St. Petersburg and, most recently, Poet Laureate of Florida.  His latest collection of poems is Tasting Like Gravity (U. of Tampa Press, 2018). His book of essays, To Start With, Feel Fortunate, illustrated by his wife Jeanne, received the 2017 William Meredith Award. His other recent books include The Expert Witness (2016), a collection of stories,  a children’s book in verse, The Elf Poem (2015), and Lucky Bones (2014), his eighth collection in the prestigious Pitt Poetry Series.  His work has appeared in The New Republic, The New Yorker, The Atlantic, Poetry, and dozens of other magazines. He has published over 20 books of poetry, fiction, and nonfiction. Truth and Affection, published by the University of Tampa Press (2013), is a collection of his Poet’s Notebook columns with his wife Jeanne’s drawings, from Tampa Bay’s alternative newspaper, Creative Loafing. His poetry has received many awards, including two NEA Fellowships and three prizes from the Poetry Society of America. His book of short fiction, The Piano Tuner, won the 1986 Flannery O’Connor Award.Mr. Meinke directed the Writing Workshop at Eckerd College for many years and has often been writer-in-residence at other colleges and universities.  www.petermeinke.com